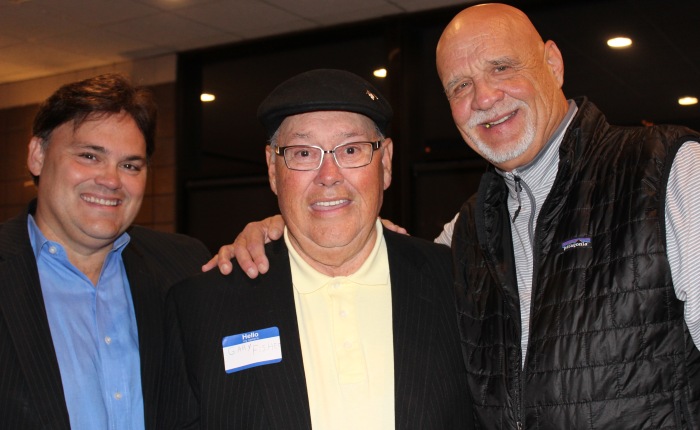 I have watched every single Super Bowl. Well at least that’s what my dad tells me. I honestly don’t recall the first one since I was only a little over a year old. But dad says he and I sat in front  of our old Zenith black and white and watched it with him, so I’ll have to take his word for it. I remember snippets of games after that, but it wasn’t really until I was about 8 years old that I really remember every single thing about a Super Bowl, that being the ’73 contest between my beloved Miami Dolphins and the Washington Redskins. I had liked the St. Louis Cardinals up to that point, mostly because they had cool helmets, but the Fins became my team for life during the ’72 season, and that was it.

Given this rumination, and the fact that at the time, we were in the year of the 50th Super Bowl, it was particularly notable that I had the unique opportunity to  accompany my dad to his 55th high school reunion. Not only did I meet a bunch of people my dad had been talking about for literally my entire life, I also got to put real people together with the faces that I had only seen in my dad’s dusty high school albums. It was great fun from start to finish, and I was particularly impressed by the turn out. Something like 75% of all living graduates attended this event, a fact made more impressive given the age (75) of the average graduate, and the reality that Bendle High School, in the 60’s, was a small school.  Dad had always been in the minority by not attending these events. For one reason or another he always had a reason why he couldn’t make it. He certainly had no shortage of good reasons as I recall – one year I was hit by a car, another year I had serious surgery, another time our house blew up (well only the top half), and one time he was in the hospital with surgery. In any event he was one of the MIA’s from Reunionville for decades. All of this made his surprise appearance an even bigger deal in this tight knit group. Having lost my mom a year and half prior, no one thought it likely he’d be there for this one either. But there he was.

All of this brings me back to the Super Bowl theme. One of the first people to approach my dad was one of his best friend’s growing up, a fella named Paul Krause. My dad had been telling me stories about Paul since I was old enough to remember tossing a football around. Paul was my dad’s running mate in junior high and high school in sports, and fun. When I was watching the 1970 Super Bowl which featured the Kansas City Chiefs against the Minnestota Vikings, dad pointed out that his buddy was wearing #22 for the Vikings. I remember thinking that he must have been talking about the Flint Northern Vikings, the local high school team we followed at the time. He had a hard time explaining to me that the Minnesota Vikings were a different set of Vikings. In any event, I thought it was pretty cool that my dad was pals with someone on that little black and white Zenith in our living room. It was clear this was an important game too, so that added to the coolness effect.

As I got older we had a lot of opportunities to watch Paul play on the tube, as he’d appear in three more Super Bowls- ‘74 against the Dolphins, ‘75 against the Steelers, and  ‘77 against the Raiders. Sadly, for Paul, all were losses, but as Krause told me during the reunion dinner ‘If you’re going to lose four games you can do a lot worse than have them be Super Bowls’!  I had to tell him that my favorite team growing up was the Miami Dolphins. “That Larry Csonka was a handful”, Paul said. “Really hard to tackle–he was like a freight train.” I asked him who were the toughest guys he competed against in the Super Bowl, and he laid out a litany of the greatest players of my youthful past: Terry Bradshaw, Ken “The Snake” Stabler, Franco Harris, Lynn Swann, Len Dawson, Mercury Morris, Paul Warfield, Freddie Biletnikoff, and John Stallworth.

In fact Krause was in town not just for the reunion, but also to present a “Golden Football” to his alma mater, a perk of having appeared in all of those Super Bowls with the Vikings, and something being done around the country by his fellow Super Bowlers. However, Krause is more than just a former NFL football player. He is quite likely the greatest athlete to ever come out of the Flint area. That’s saying an awful lot when you consider the almost unreal quality of talent to emanate from Flint.

His feats in high school are legendary. My dad and Paul were excitedly telling me the story of the night Krause set the county high school basketball scoring mark of 57 points in a single game. A record that still stands to this day, made even more remarkable in a pre-three point play era. They spoke of football games, and baseball games and how Krause once left a baseball game to jump the fence and win track events in the 440 and pole vault, then returned to the baseball game to pitch a no-hitter.

Krause went on to national prominence at the University of Iowa, and then played in all of those Super Bowls in the NFL. Along the way he was named All Pro 9 times, and elected to the NFL Hall of Fame in 1998. He also holds one of the NFL’s most hallowed records with 81 interceptions, making him the NFL’s all time pass theft king.

While all of that is without question interesting,  I didn’t spend a lot of time asking NFL questions. At the time, the main topic at our table was the 85 yard pass play Krause tossed to my dad that helped them win a close game against Corunna in ’58. And that was just fine with me.•