Book Review:  The End of Diabetes, by Joel Fuhrman, M.D. 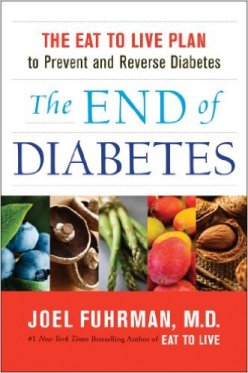 Diabetes is extracting an awful price on America. It is a devastating and insidious disease that is not only growing like wildfire, it’s affecting people from youngsters to oldsters, and everyone in between.  The toll it can take on families is equally destructive. Emotionally it’s impossible to put a price tag on the pain it causes, and from a purely financial perspective it’s off the charts.

The average diabetic incurs $6,649 in health care costs directly attributable to diabetes each year. (Source Economic Costs of Diabetes in the U.S. in 2007. Diabetes Care 2008; 31(3):596-615/).  More than half of all Americans will be pre-diabetic by 2020 at a cost of $3.35 trillion to the US health system if current trends go on unabated, according to an analysis of a report released by UnitedHealth group. The medical journal, The Lancet, called it a “public health humiliation” that diabetes, a largely preventable disease, has reached such epidemic proportions.

Diabetes Mellitus is a chronic disease that causes serious health complications including:

Heart Disease and Stroke – 80% of diabetics die of heart attacks and strokes.

Nervous System disease including Erectile Dysfunction and loss of feeling in the feet.

If that list isn’t enough to make you very interested in preventing or reversing diabetes, you’re not paying attention!

Dr. Fuhrman say’s that “The majority of medications used to lower blood sugar place stress on your already failing pancreas. The probability of your diabetes getting worse under conventional medical care is especially likely since medications used to control blood sugar, such as sulfonylureas and insulin, also cause weight gain.  The dangerous combination of pushing the pancreas to produce insulin and gaining more weight with medication actually results in the need for additional medication as you become increasingly diabetic. This common and yet failed approach shortens life span and increases the risk of heart attacks.”

Instead Dr. Fuhrman suggests something he calls a “Nutritarian” approach.

This formula say’s that your health is determined by the nutrient per calorie density of your diet. When you eat more foods that have a high nutrient density and fewer foods with a low nutrient density, your health will dramatically improve and your diabetes will melt away.”

The primary cause of diabetes in the first place is the American diet, which promotes obesity. This, coupled with our increasingly sedentary lifestyles, has exacerbated an existing problem and turned it in to the disaster we have now. In fact, as processed foods find their way around the world, the problem continues to grow globally, not just domestically.

Attacking the problem with the Nutritarian diet, and exercise have proven to be incredibly effective for Dr. Fuhrman’s thousands of patients.   In fact the results he cites in the book are nothing short of miraculous.  I suspect most Americans will not immediately embrace such sweeping lifestyle changes.  However, when compared to the nightmarish vision of what diabetes brings, the tradeoff looks like a pretty good deal.

This is a timely book that can make a huge difference in the lives and destinies of millions, and suggests enormous public health and economic benefits as well.   •